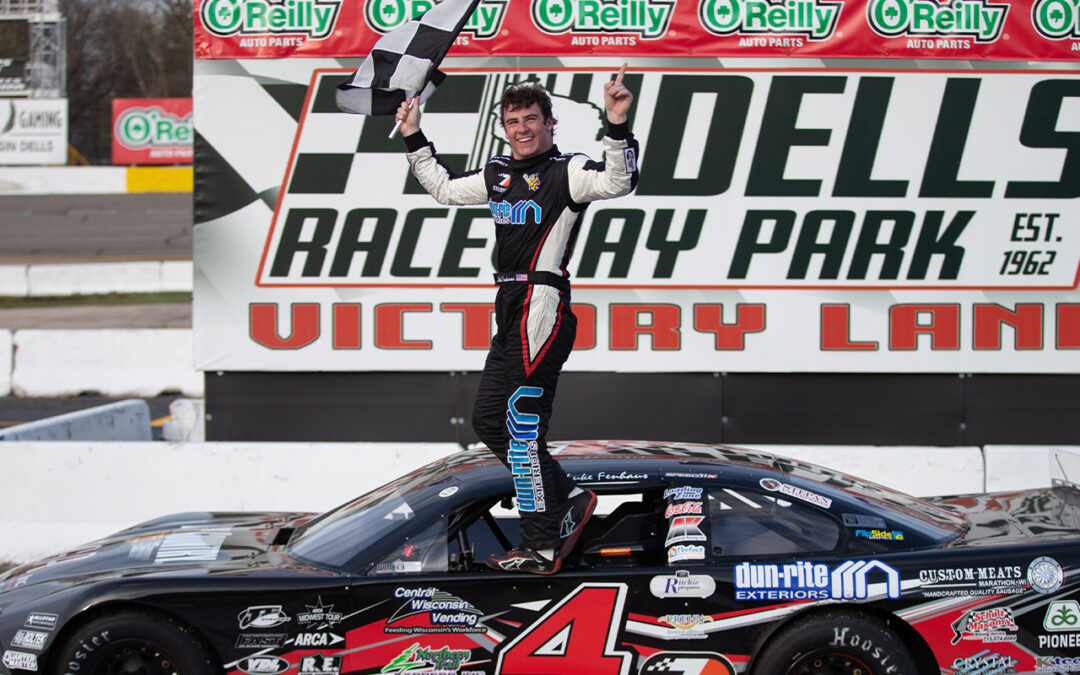 Luke Fenhaus started his 2021 season the best way he knew how; a win at the Icebreaker 100.  The Wausau, WI driver showed he will be one to watch this year as he sailed to the win with a stacked field and full stands.

“It was awesome to win against some really good guys, some of the best around Wisconsin and a great crowd,” said Fenhaus.  “We had a really good car and I’m super proud of my team.”

The field for the 100-lap event at Dells Raceway Park (WI) featured some of the best drivers in the Midwest and across the country.  Of the forty-two cars that took time in qualifying, Fenhaus laid down the second-fastest lap.

After the positioning heat race, Fenhaus rolled off 12th for the Icebreaker100.  The KDDP (Kulwicki Driver Development Program) driver began to quickly work his way through the field, moving into the top-ten on lap 21.  From there he continued his charge to the front, making his way into second on lap 28.  From there, it took just 14 more laps to take over the lead.

“I would say about half way through I knew we were good,” said Fenhaus.  “I got to the front right away and saved my stuff, and after that I knew my rear tires would be cool and I would be fine.”

Fenhaus continued to put distance between himself and the rest of the field over the following laps, until the caution flew late in the race bunching up the field for a final restart.

“My restarts were pretty good, I was fine with them happening,” said Fenhaus.  “I knew when we had another restart with the No. 7 to my outside that it was gonna be tough and I had to get a really good restart, but I nailed my one and two and cleared down the backstretch.”

The 17-year-old driver pulled away from the field over the closing laps to take the checkered flag in his first race of the year.

“It’s awesome to start the season off by winning, there’s no better way or feeling, said Fenhaus.  It brings a lot of confidence heading into the next couple races and I think we have a great team this year.  We hit on something big at Dells, so I’m really excited for the rest of the season.”