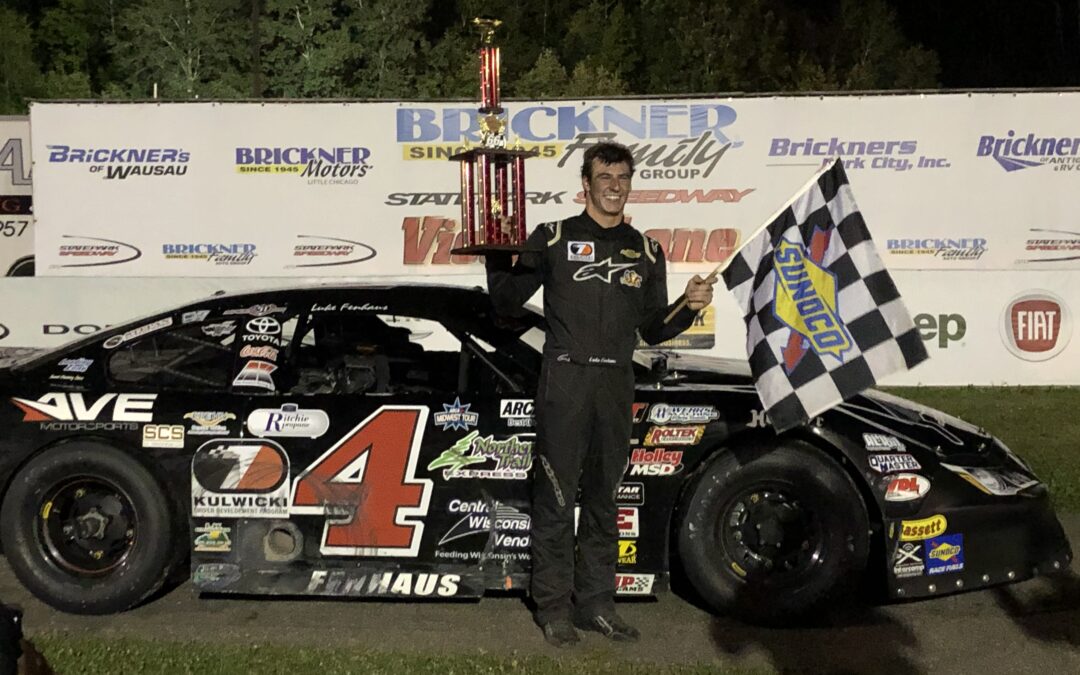 WAUSAU, Wis. (Aug. 20) – For the third straight year, racing in the Wayne Lodholz Memorial brought out the best in Luke Fenhaus.

Another run at the Lodi Memorial proved to be just the cure for season-long struggles at State Park Speedway for Fenhaus. The 16-year old Wausau racer won the event for the third straight year, copping the 75-lap Auto Select Super Late Models pres. by C-Tech feature for his first feature win this season.

Fenhaus got by the season’s hottest driver on his way to the win, passing Gleason’s Justin Mondeik for the lead on lap 51. He led the rest of the way, including navigating a restart with just six laps left to finish four car lengths ahead of Mondeik at the finish.

“It feels good to be back,” said Fenhaus after the race in Brickner Family Auto Group Victory Lane. “We’ve struggled this year, (and) Mondeik’s tough, everywhere this year, so it’s good to beat him.”

Fenhaus was running third when a caution came out with 30 laps to go. He moved up to the front row for the restart after second-place Brock Heinrich chose to start on the inside behind Mondeik.

Mondeik appeared to have gotten away from Fenhaus when he cleared him shortly after the restart, but Fenhaus closed back in and then got to Mondeik’s bumper between turns three and four on lap 50, getting the leader loose. Fenhaus got inside Mondeik, led lap 51 and completed the pass a lap later.

Mondeik would feverishly attempt to stay with Fenhaus but was five car lengths back when a caution came out with six laps left when Mark Mackesy spun after contact from Heinrich. Mondeik chose to restart behind Fenhaus, with Mackesy starting outside the leader, but Fenhaus pulled away quickly and went on to the win, capping it after the checkers with the Polish Victory Lap made popular by late NASCAR champion and Wisconsin native Alan Kulwicki.

Fenhaus has run well this summer at special events around the state, including a third at the Slinger Nationals in July. He has had an admittedly tough year at State Park, with just one top-five feature finish entering Thursday night, a fifth on July 2.

Thursday night appeared to be more of the same at first for the 2018 track super late model champion, who was running sixth after 20 laps. Fenhaus got by Mark Mackesy for fifth soon after that, though, and a caution came out on lap 24 when second-place running Travis Volm spun on the back stretch after contact with Mondeik and then Heinrich.

Fenhaus moved up to fourth on the restart and made steady progress after Mondeik took the lead and led laps 24 through 44 before the lap 45 caution. Fenhaus passed Mackesy again and was in third when the yellow came out, setting him up for a shot at the leader from the outside of the front row on the restart.

Mondeik came up just short of his attempt to sweep all three of State Park’s headlining memorial races and its four biggest super late model races, as he previously won the Flip Merwin Memorial, Larry Detjens Memorial and TUNDRA race. He still gained more in the point standings over his nearest competition, though, and now leads Heinrich by 71 points going into the final week of the season.