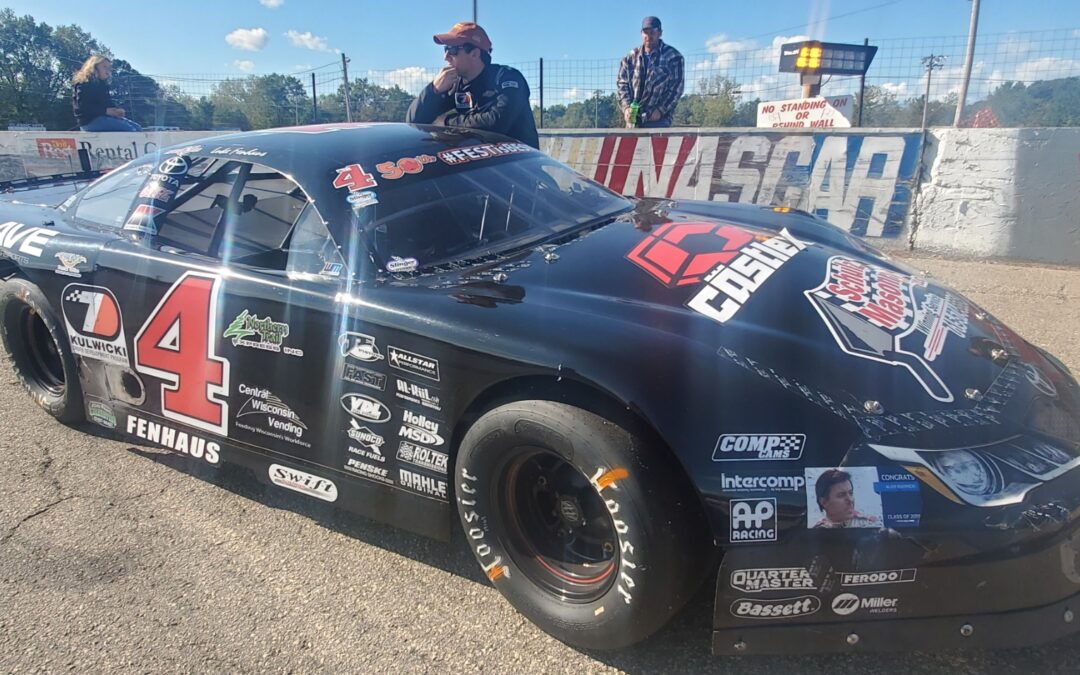 Oktoberfest weekend looked as though it was going to start off on a strong note for Luke Fenhaus.  The young driver found himself leading the Futures Feature on Thursday night with just handful of laps to go.  However, contact with another driver in the closing laps sent the No. 4 car spinning into the front stretch wall with heavy damage.

“Fest was going really good, thought we had a really good chance at winning Thursday night,” said Fenhaus.  “I had a really good car just unfortunately got into a wreck that screwed up our entire weekend.  We were both really racing hard and I started to get really free off the corner and he just drove kind of straight through and never tried to go around me or anything. I just couldn’t save it after he got into me.”

Fenhaus’ team made a trip back to Wausau for parts and worked late into the night on Thursday to get the car put back together for the Trickle 99 Friday and the ARCA Midwest Tour Oktoberfest 200 on Sunday.

“My hardworking team never quit,” said Fenhaus. “I can’t thank them enough for what they did for me and my family. They were always there helping out and trying to get better.”

Unfortunately for Fenhaus, his No. 4 car was never able to fully rebound from the incident on Thursday night.  The Wausau, WI driver failed to race his way into the Trickle 99 on Friday, but finished fourth in the Stubby Feature.  On Sunday, Fenhaus also failed to make the Oktoberfest 300 on time, but received a provisional into the starting field.  Fenhaus drover from the rear of the field to the 19th position to close out his Oktoberfest weekend.

“We really struggled again with getting the car dialed in,” added Fenhaus. “We worked really hard all day and all night to fight the problem but in the end couldn’t get it good enough for Friday night in the Trickle 99. Sunday we struggled again with getting the car dialed in and it was really hard to work with during Sunday’s race, but my team, my family, and I never gave up.  I think my team and everyone really deserved a better finish and a better run, but we gave it our all.”