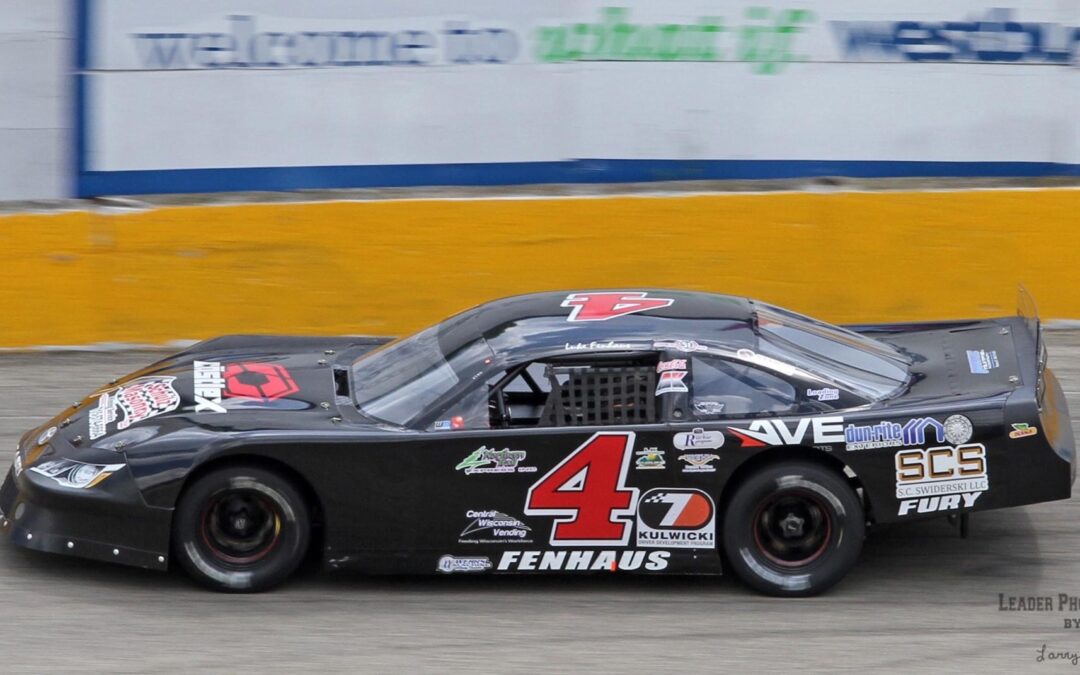 Luke Fenhaus made a statement a few weeks ago at Slinger Speedway for the Slinger Nationals.  In one of the biggest races of the year, the Wausau, WI driver set fast time amongst a stout field and went on to bring home a third place finish.

“Slinger was one of our best performances this year,” said Fenhaus.  “We had a great car all weekend and I was really happy with the outcome of the weekend.  It was pretty cool, considering we were second last year and then qualified first this year against so many big names.”

After starting 12th with the invert, Fenhaus worked his way into the top-five by lap 83.  The team made minor adjustments during the ten minute break at the halfway point and when the field went back to green, he continued to charge towards the front.  The young driver made his way into the second spot on lap 105 and set his sights on the leader, Ty Majeski.

While Fenhaus worked to chase down Majeski, Casey Johnson’s car came to life as well.  Johnson was able to get by Fenhaus with 35-laps to go and Fenhaus held strong to earn a podium finish.

“I know we had a really decent car, but nothing for the 91 of Majeski or the 47 of Johnson,” said Fenhaus.  “We just got too tight on the long run and didn’t have enough roll speed to keep up with those guys.  I think the short run we had really decent take off speed and it could roll throughout the corner really well, and that’s what I needed at the end for the 91, we just missed it a little bit.”

“It was awesome to run up front with those two guys, they’re definitely the best in Wisconsin so I’m glad we gave them a run throughout the race,” said Fenhaus.

Now Fenhaus sets his sights on the Midwest Tour opener at his home track of State Park Speedway.  The 2018 track champion has struggled at State Park Speedway so far in 2020.  He still has yet to find Victory Lane and bad luck seems to find him each week.

“We have struggled lately with a lot of bad luck,” said Fenhaus, “But we definitely haven’t given up.  We’ve improved a little bit, but I think it’ll be interesting this weekend, it’s gonna be a tough field that’s for sure.  I think everything needs to go as plan on Saturday night and get the car hooked up all day long and try to finish it out at the end.”

The ARCA Midwest Tour Detjens Memorial 125 will be on Saturday at State Park Speedway.  Fan gates open at 3:30pm with qualifying at 4:30pm and racing at 6:00pm.  If you can’t make it to the track, you can watch live on Speed51.com.